Despite being geologically fairly young, Iceland celebrates its birthday on the 17th of June each year, after officially becoming the Republic of Iceland in 1944. While some of the earliest temporary settlers (around 825 AD) were Irish monks, the Vikings took over and later the Norwegian monarchy. They then put the island up for sale to the highest bidder and the Danes "leased" the governorship, while imposing Lutheranism and a crippling trade monopoly in the early 1600s. When it seemed things couldn't get worse, certain areas were raided by Barbary pirates and many Icelanders kidnapped and enslaved.

Meanwhile volcanoes periodically exploded, covering the countryside in thick ash; wiping out people, crops and livestock. When the Black Death arrived from Europe, half the Icelandic population succumbed. Then in 1783, the Laki row of craters erupted for 8 months straight; emitting noxious gas and creating the Haze Famine, which ultimately killed 9000 people.

So, after 5 centuries, Icelanders had had enough of oppression and bad luck, and began to work toward political independence. Though desirous of neutrality in WWII; Iceland having no military was occupied by Britain to keep it out of German hands. After independence in 1944, Iceland became a reluctant member of NATO and an even more reluctant host for US personnel. Those forces departed in 2006. 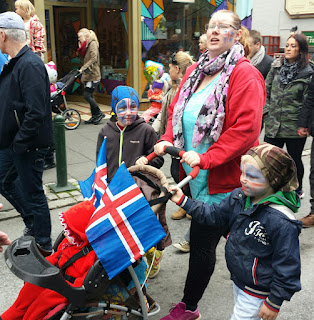 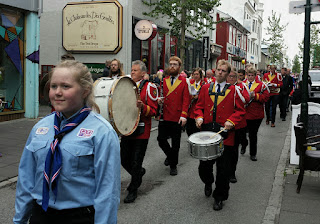 After such a punishing history, Icelanders go all out in celebrating their national birthday. Reykjavik was jammed with celebrants, parades, outdoor bands and performances, carnivals, car shows and free-to-the-public singing and musical entertainment in the Harpa Concert Hall. 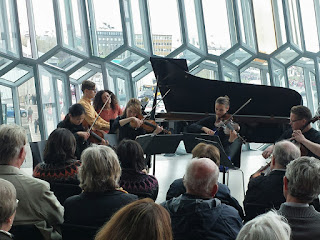 We stopped by to say "hello" at the American Embassy, but no one was home and we were (politely) not invited in!

In the early evening, Paul and I met the leaders of our photography tour group, William and Iurie, along with 10 other, mostly American, photographers, all eager to begin our pixelated adventure early the next morning.

Now, for the picturesque and sublime scenery,