Getting in Rhythm with the Road

Getting in Rhythm with the Road

We were so excited to FINALLY be driving the ALCAN Highway. There was a real sense of "Living the History" of the area, in terms of the First Nations peoples (Athabascan - Dene), the early trappers, pioneers and settlers, as well as the US military. All transformed Northeastern British Columbia, though the carving of the highway, for the transport of military supplies, had the greatest impact over a very short time. 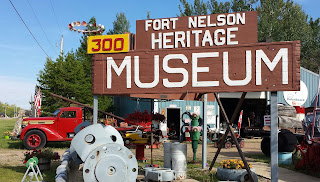 Three hundred miles up the ALCAN, stopped at Fort Nelson, population 6100 sturdy souls who enjoy an average of 116 frost-free days per year.

Located right on the highway and next to the RV park we'd selected for the night, The Fort Nelson Heritage Museum almost sucks travelers off the highway with its eye-catching abundance of vehicles, machinery and gadgets out front.

The interior and back areas are filled with all manner of antique household items, taxidermy, and garages filled with memorabilia of the early automotive days; cars, motorcycles, tools and signs. 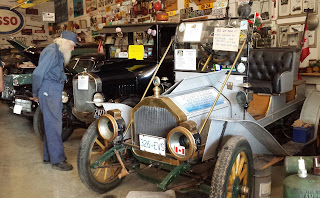 We met Marl (bearded fellow), the Head Hoarder, errrr "Curator" of this collection. When asked if he'd "lived here all his life?", he responded "I hope not!" with a twinkle in his eye. Actually, he'd "come up the road in '56" and stayed ever since. 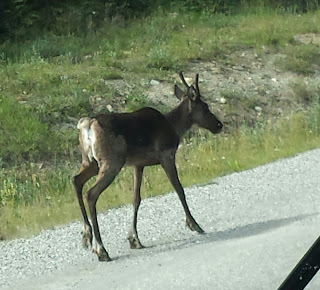 A female caribou trotting up the roadside. 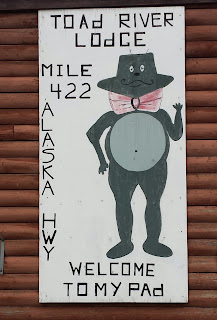 Home-made sign inviting one to stop at the cafe. 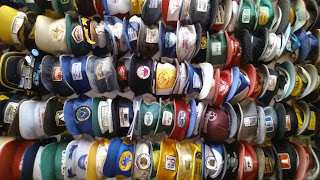 The cafe's claim to fame was the over 7000 hats stapled to the ceiling. We didn't try the food. 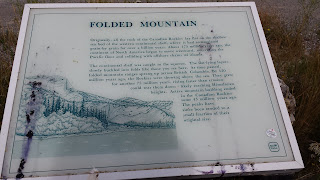 The area had all kinds of interesting geological formations, including "Folded Mountain". Look closely to see the stratified layers folding back on themselves, formed as the flat continental shelf collided with offshore islands causing buckling and formation of the Canadian Rockies. 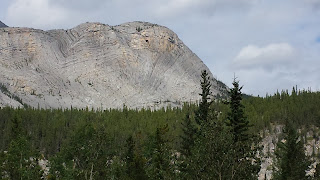 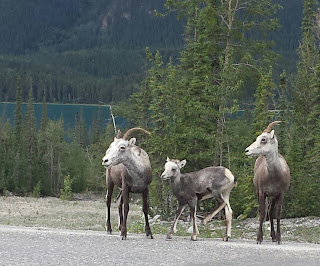 A small clan of Stone Sheep crossing the highway. Stone Sheep are a darker version of Dall Sheep with thinner horns, also called Thinhorn sheep. The lambs watched nervously from above, uncertain about when to follow the group. 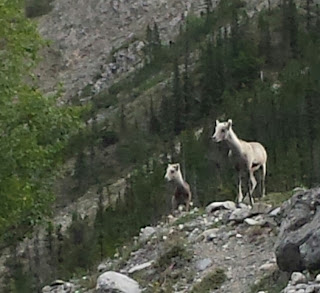 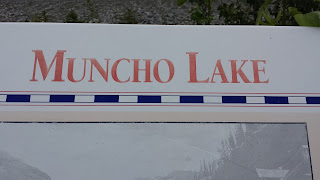 Muncho or "Big Lake" in the local language is one of the largest natural lakes in the Canadian Rockies with deep blue and green waters. Copper oxide leaches into the water to cause the coloration. In places, the lake is over 700 feet deep, and sustains a variety of fish species. 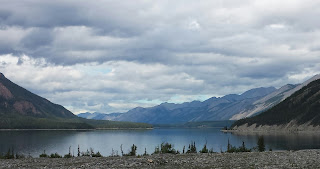 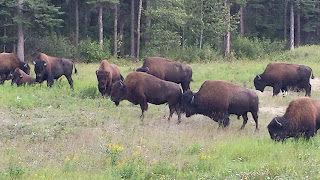 Wood (or Mountain) Bison are a subspecies of bison and are morphologically different than Plains Bison. These Wood Buffalo males are heavier, weighing up to a ton each-the largest on the continent. Their heads are bigger with more weight in front of the front legs, due in part to larger horns and beards. 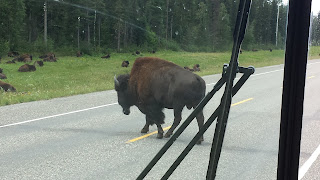 They were nearly hunted to extinction, but have recovered with protection from Canadian government agencies. They now number about 7000 and some have been transplanted to once native areas in northern Russia. This group seemed quite at ease grazing alongside the highway and criss-crossing at will. Other than a big truck or RV, most vehicles would lose out in a collision!

Now, to the Yukon, whose motto is "Larger than Life!"