Eastward along the southern coast of Iceland, the volcanoes and their icecaps become more proximal to the sea. There is only a narrow strip of green and vegetation between the lava and the high tide mark. Making the most of Mother Earth's materials, early settlers used the sod to cover and insulate homes. Below is yet another sod covered church and a lovingly preserved graveyard that has become a national historical site. All pics taken with camera phone. 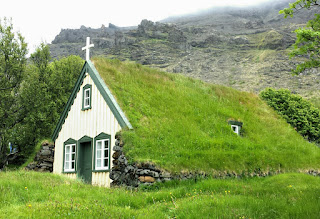 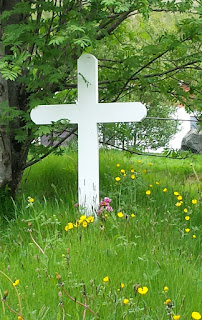 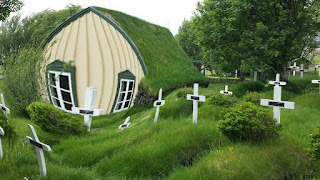 Near the town of Jokulsaron, tourists are treated to a magical sight. As the Breidamerkurjokull glacier has receded (some years at a rate of over 100 meters/yr) a lagoon has formed at the base. When bits of glacier calve off, they float in a jumble in the placid fresh water. Slowly melting, they slowly shrink, flip over and constantly rearrange themselves. These top two are from the first evening at about 10 pm. They show true shades of "glacier blue". 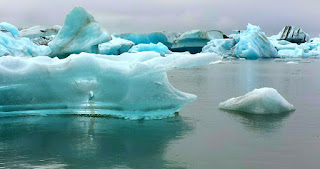 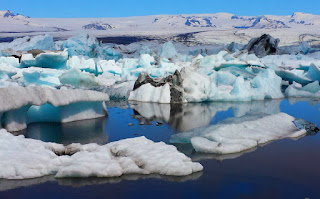 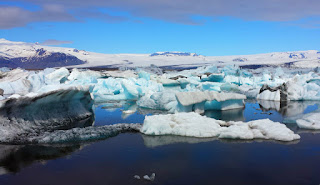 At low tide, some of the smaller bergie bits float 200 yards down a stream to the sea. At the next high tide, many of the bits are deposited high on the volcanic sand beach near the mouth of the stream. As the waves crash over them and recede, the patterns formed over the black beach pebbles are most interesting, in the abstract. 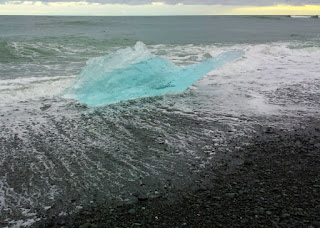 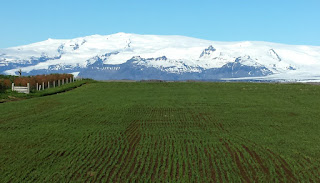 The restaurant/museum at Hali, designed to resemble the volumes of books written by a local storyteller. Iceland boasts the highest literacy rate of any nation and publishes more books per capita than the rest of the world. 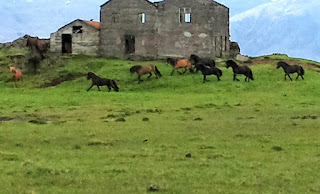 Black sand dunes and coarse grass as the mountains touch the water's edge.

The coastal populations thins moving eastward, but the beauty does not!

The photo tour part of the trip wraps up tomorrow as we return to Reykjavik.
Enjoy,
Barbara and Paul