There's GOLD in them THAR HILLS


There's GOLD in them THAR HILLS

We were up at 5 AM to get an early start on the long drive to Dawson City. 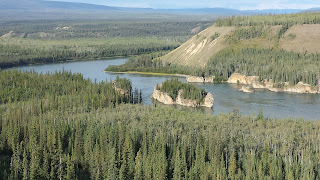 About halfway there, an overlook provided a nice view of the Five Fingered Rapids, a set of rocks/small islands that divides the Yukon River into 5 passages. This challenged the sternwheelers and rafts trying pass downriver, in the 1800s. 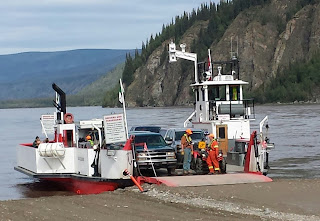 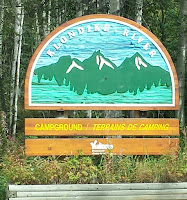 One uncertainty in traveling through Dawson City, was that our stay coincided with the annual "Discovery Days" celebration; marking the first significant discovery of gold up the Klondike River on Bonanza Creek, 120 years ago. The ONLY way to cross the Yukon River at Dawson City, is aboard the small "George Black" free government ferry. Walk-ons can ride any available ferry, but automobile, RV and trucks often have to wait for quite a while to be taken aboard. Fortunately, it's a short 5 minute trip and is quite charming, however the landings on either side are not yet paved. 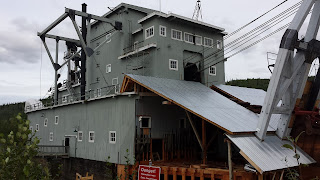 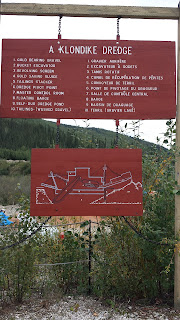 Soon we were driving to 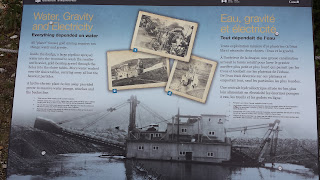 Bonanza Creek to see National Historic Site Dredge No. 4. After all of the easily found gold had been extracted from the Klondike River, hand and low tech mining took over.  Then, when corporations became involved, larger more mechanized means were developed to continue efficient, profitable mining. Hence, dredges were built to scrape out huge quantities of gravel from the creeks and rivers. This, the world's largest wooden hulled, bucket line gold dredge was built in 1912, and worked until its sinking in 1960. Thirty years later later, it was rescued and restored. A nearby hill yielded an expansive view of the Yukon River above and below the city, the town itself and vast numbers of rippled waste gravel tailings pile up the Klondike River tributary, and Bonanza Creek. 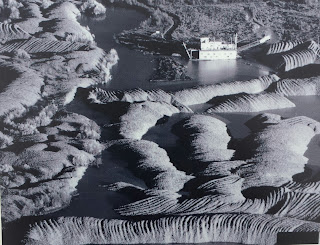 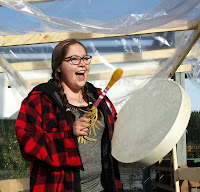 Long the site of a Han- speaking Tr'ondek Hwech'in tribal fishing village, the current city was founded about 1897, by early prospectors in anticipation of the Klondike Gold Rush. With the start of the Stampede, the region's population exploded from several hundred to almost 30,000. It ultimately required 100 years of negotiations with the Canadian government for the tribe to regain their right to independent self-governance.
Unfortunately for the late coming miners, almost all of the land had already been claimed. Thus, their only choice was to toil for basic wages in the employ of the "Sourdough" men, who had been there from the start, and had already extracted great fortunes. Many latecomers returned home sick & penniless or raced on to Nome, Alaska following rumor of another gold rush. At the current price of  $1350 US per oz., many still make a living at it.

Dawson City now has a year-round population of about 2000, but numbered only a few hundred at its post-Gold Rush nadir.

It was fortuitous that our visit coincided with "Klondike Discovery Days", an annual festival to commemorate and celebrate the area's historic mining roots. 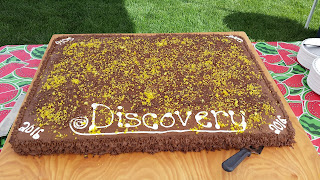 We enjoyed the homestyle parade, complete with Mounties, hockey team, kids on bicycles and young musicians. The firetrucks' sirens and Mud-boggers' unmuffled engines were quite deafening! Afterwards, there were speeches in the town park from various dignitaries, with free watermelon and cake for all attendees. We met Mr. & Mrs. Yukon (local native elders in traditional clothing, as well as the local representative member to the Canadian Parliament. 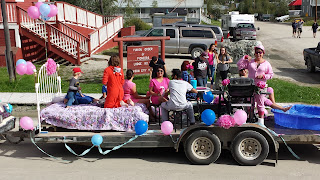 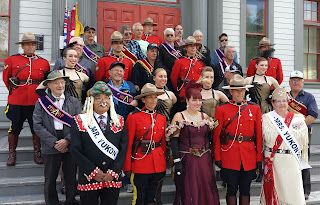 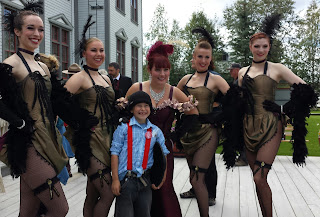 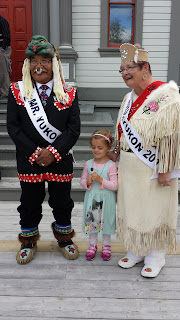 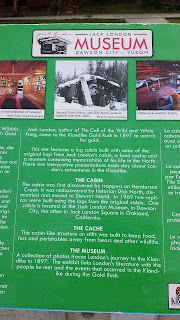 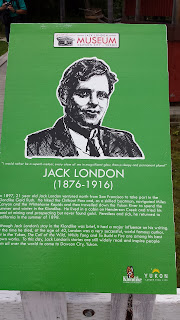 Just a few blocks up hill we visited the cabin once occupied by poet Robert Service, as well as a reconstructed cabin made from logs taken from the mining shack once home to  a young Jack London, around 1897. 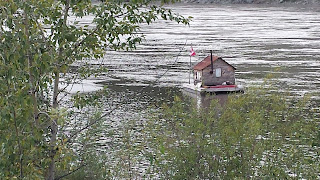 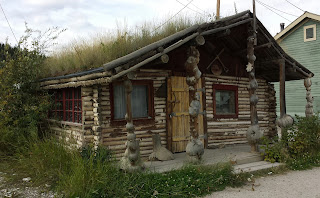 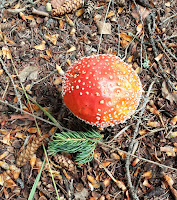 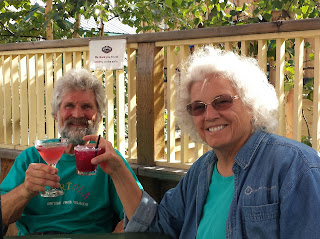 
Next, on to the Great State of Alaska!