The Wolfman and Butler Wash

The Wolfman and Butler Wash

On several days of our trip to SE Utah, we were "blown out" of our efforts to flight-see by gusty winds of up to 40 mph. Trying to keep aloft and under control in a 500lb. aircraft with heavy winds, is not fun nor safe.

Therefore, we decided to explore the many canyons and creeks in the area, many of them appointed with Anasazi (Puebloan predecessors) dwelling remains and petroglyphs, by automobile and on foot. Our search was rewarding and aerobic.

Just north of the Bluff airstrip is a drainage called Butler Wash. The dirt road, populated primarily by cattle and jackrabbits, extends about 20 miles between US 163 and UT95, SE of Blanding. In places it's shallow and sandy, in others, it is 300 feet deep and quite rugged.

At the southern end, after a little scramble down crumbly sandstone, we found what is known as "The Wolfman Panel" 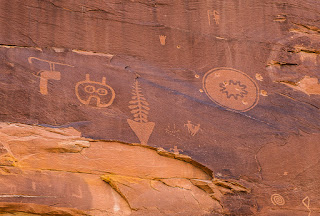 Pecked petroglyphs interpreted as an owl mask and corn plant. 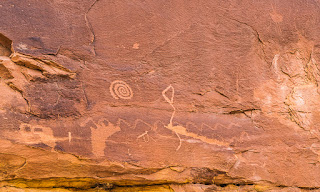 Doodles of uncertain significance. What do you see? 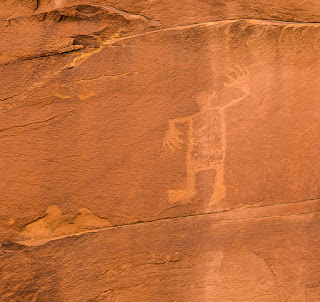 Many sources describe this figure with large hands and claws as the "Wolfman". 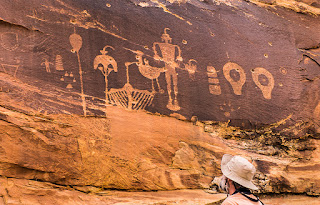 Paul tries to interpret a series of figures, some appearing to be alien, one resembles a sandhill crane, another humanoid with large hands, and a pair of balloon- or pregnant uterus-shaped petroglyphs. 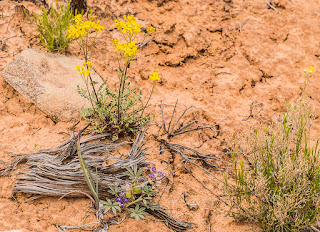 On up the wash a bit where delicate blossoms offer a little color contrast. 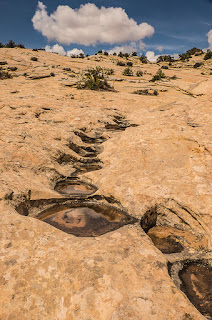 Visitors follow a half-mile trail over the slick rock, admiring the etched stone bowls created by mini-cascades of water over centuries. 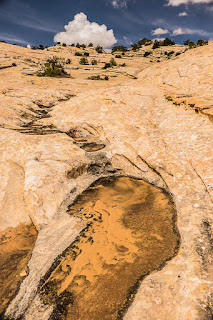 Sand "Paintings" form in the basins hollowed out by flowing rainwater. 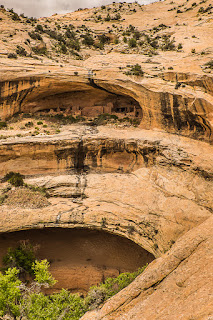 Following a series of rock cairns, one comes to an overlook. Ahead is Butler Wash Ruin. It is a cliff dwelling that was presumably constructed and occupied by the Ancestral Puebloans, (Anasazi), around about 1200 AD. Areas of the site have been stabilized and reconstructed, but most of it remains as discovered in the 1800s. There are habitation, storage and ceremonial structures, including four kivas among the rooms. 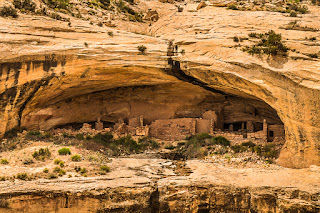 Within an alcove beneath the canyon rim, the remains are somewhat protected from the wind and rain. There are several structures, including houses, kivas, grain storage rooms and four kivas. Above the alcove, one can still see the "Moqui" hand and footholds carved by the ancient inhabitants to access the site from the plateau. 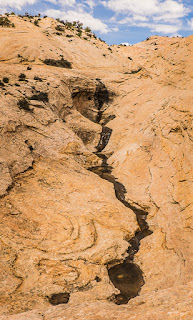 Tiny rivulets follow the crevices after a recent rain. 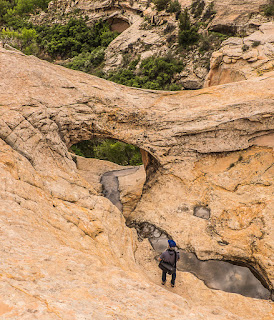 Over the centuries the rivulets have worn through the rock to form an arch. The water drops over the precipice onto the canyon floor. Paul taking a closer look. 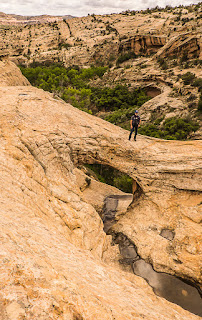 Paul standing atop the arch, unconcerned about the 100ft drop just behind him. 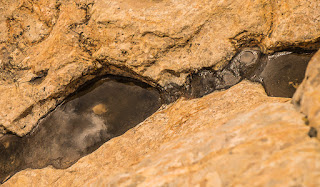 The clouds reflected in the slow moving rivulet. 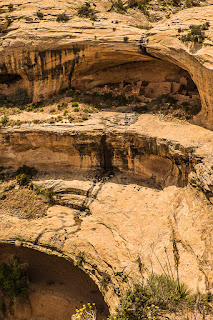 Technically speaking, the Butler Wash Ruin is thought to be a Pueblo III ruin. It appears to be mostly Mesa Verde style in its construction and the pottery found in the site was Mesa Verde style. The inhabitants likely farmed below and further down the wash. The area was likely chosen because it was difficult to approach unseen and could be easily defended. 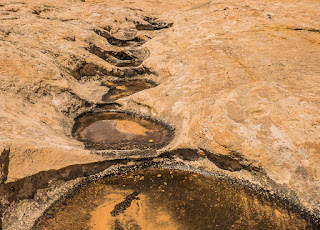 Thanks for sharing these fun discoveries.
Next up, we are airborne again over the Goosenecks and Lake Powell!