Returning from AWOL, since the Best is Yet to Come

Returning from AWOL, since the Best is Yet to Come!

The BEST is Yet to Come!

Sorry to have been missing from this blog for several months now. But as you know, sometimes life gets in the way. We'd like to resume the blog on our travels to Canada and Alaska with this post, for your viewing and reading pleasure. We'll also pledge to try to be more timely in completing it.

Let's pick up where we left off; around August 10, 2016. The first thing in the morning we drove back-and-forth across the Yukon-British Columbia border, paralleling the Liard River most of the way. Along the road was a place called "Contact Creek" which marked where the U.S. Army highway building teams, having started from the north and south, met up at this point in September, 1942 to complete the southern sector of the AL-CAN highway. These soldiers endured months of vehicle-swallowing mud, choking swarms of mosquitoes, and wild fluctuations in temperature and precipitation. They worked almost 7 days a week, partly due to the urgency and partly because there there was absolutely no where to go and nothing to do (other than sleep) during time off!

Nowadays, the Yukon Territory is 2/3 the size of the state of Texas, with a population of only 39,000 hardy residents! 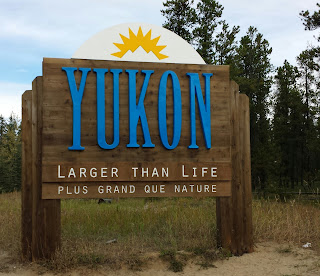 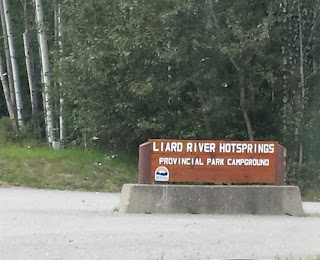 The Liard River Hot Springs and campground are known far and wide in this region as a special place to visit. The Springs are open year-round. The hot water flows down through a series of pools; from skin-peelingly HOT at the top pool to pleasantly tepid three or four links down the chain of pools. We stayed at the campsite there and strolled back and forth through the evening, along the boardwalk enjoying > 250 boreal forest species, 14 types of orchids and a doze other unusual plants growing at this latitude due to the warmth of the Springs. We did our best to sight a moose in the wetlands. We had no luck on the moose, but really enjoyed floating around in the hot springs and chatting with fellow travelers. There is also a garden above the hot springs, however it was closed due to a bothersome bear in the area. 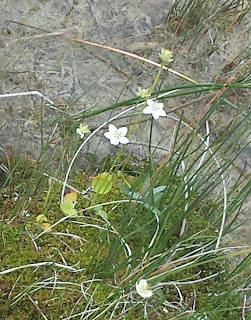 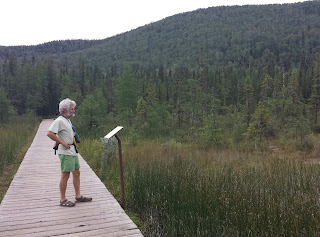 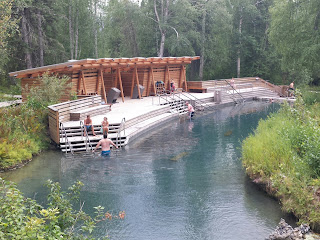 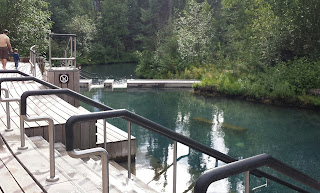 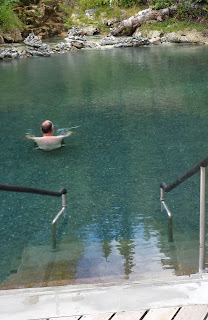 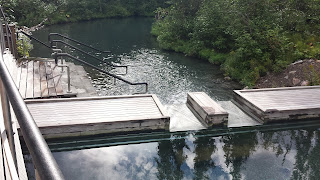 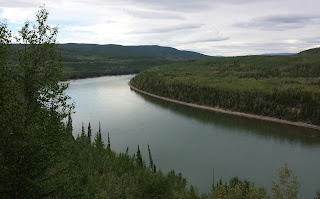 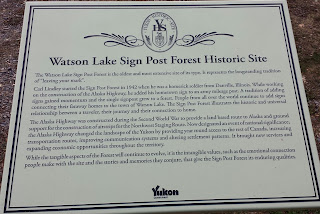 The town of Watson what is known as the Gateway to the Yukon, and it's claim to fame is the "Signpost Forest". The collection was started in 1942, by a home-sick GI from Danville, IL. He posted a sign on the side of the road pointing toward his hometown. This caught on with other servicemen and  travelers. Many have posted similar signs, now totally 75,000. We even found one sign from Corrales, New Mexico (near Albuq.) as well as a New Mexico license plate attached to a pole. 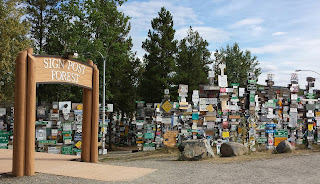 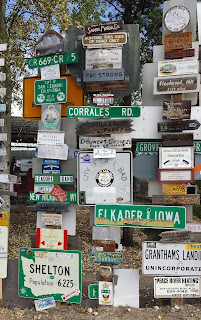 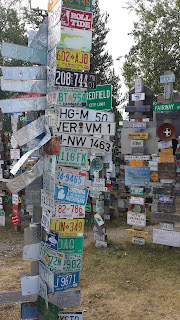 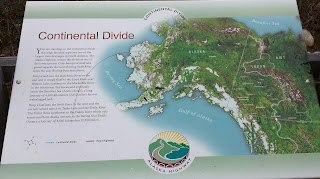 Proceeding in a north-westerly direction we passed the Continental Divide which serves to divide the two largest (gargantuan) river systems in North America; the YukonRiver and the Mackenzie River watersheds.

In the Yukon town of Teslin, which boasts 450 mostly First Nations Inland Tlingit natives, we found a number of interesting sites. First stop was the George Johnston Museum with a wonderful display of ceremonial robes and trade goods, along with his personal photo gallery of early Tlingit village life. George was a "character" in more ways than one, and was the first to own an automobile in the area, despite the total absence of roads in and around the town. He had his 1926 Model A sedan transported to the village by river steamboat, and primarily used it to drive around on the frozen Teslin Lake in the winter for hunting. Reportedly, when animals got wise to the threat of his black car, he had it painted all white to blend in with the ice and snow! 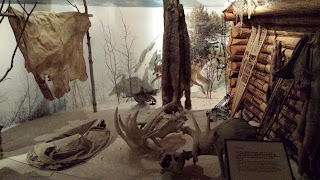 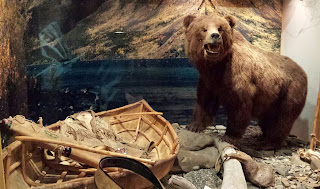 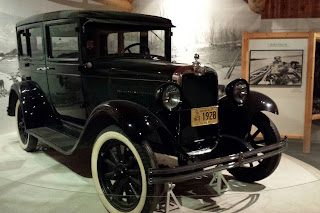 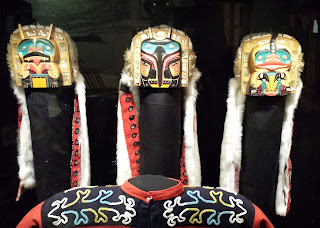 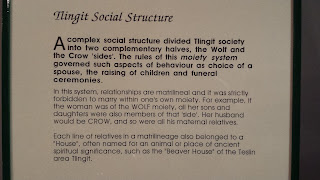 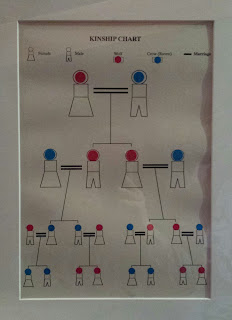 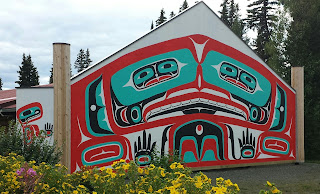 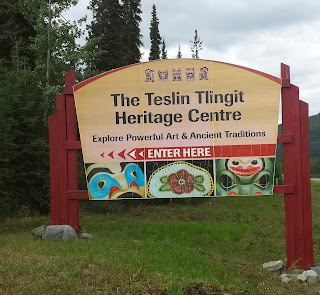 The Teslin Tlingit native Heritage Center also has some amazing bead work samples and five immense totem poles at the entrance. These portray the animal symbols for the family clans living in the area (Raven, Wolf, Frog, Eagle, Beaver). Hand-hewn canoes wait at the lake's edge. The tribal government uses the Center for Council meetings. 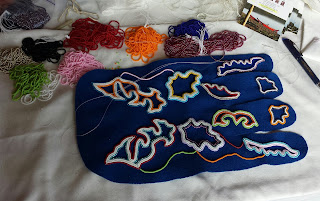 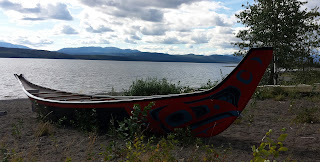 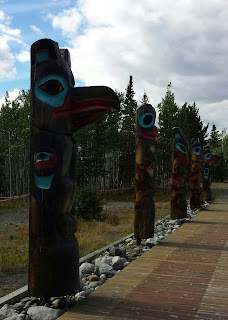 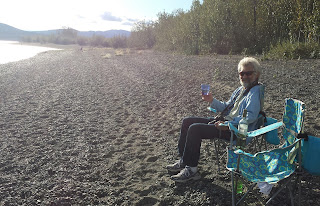 As sunset approached, we made it to the lake side campground just in time to snag a nice spot overlooking the water. We enjoyed the sunset with some wine in our beach chairs on the stoney shore below. In the Yukon, the nightly camping fee is only $12 and includes free firewood! 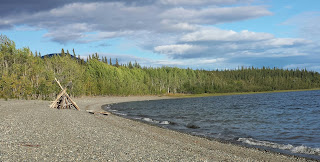 Next, on to "Discovery Days" in Dawson City and the Klondike.
Posted by P*A*T (Photography*Art*Travel) at 11:37 AM