Taking the Circus to Meet the Giants

Taking the Circus to Meet the Giants 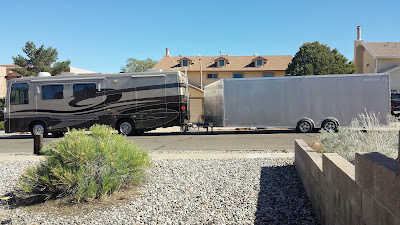 The Traveling Circus
Yep, that's a 30-plus foot Newmar brand RV (nicknamed Julie) attached to a 30-plus foot V-nosed trailer parked in front of our house last week. We were preparing to embark on the maiden voyage with the "Traveling Circus" of RV towing trailer containing Paul's ultralight and Xterra SUV. This was a test run for future plans to sight- and flight-see around the most scenic areas of the US of A 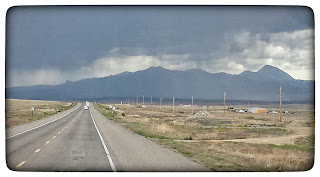 Sleeping Ute Mountain near Cortez, CO
We pointed our compass NW from Albuquerque and passed by the "Sleeping Ute" mountain (head to the right) draped in virga, by early afternoon. Virga is also aptly called "walking rain" in these parts, and is falling rain or ice crystals that evaporate before reaching the ground. 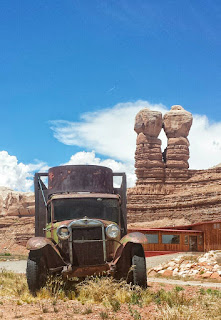 Rusted Truck beneath Twin Rocks
With light traffic and clearing weather, the "Circus" set up shop outside Bluff, UT; a small town just off the Navajo Reservation, in the SE corner of Utah. A town of only about 300 souls, it subsists mostly on the tourist trade these days. 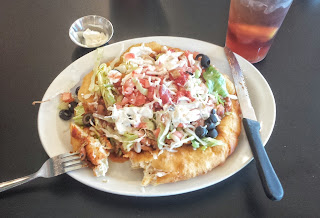 Awesome Navajo Taco
Bluff is mostly Mormon and 35% Navajo, which favors the creation of one of the best Navajo Tacos I've ever eaten - in the Twin Rocks restaurant. The base is fry bread (in lard, of course) a layer of chili, and then garnish of lettuce, tomato, onion, cheese and sour cream. Yum. 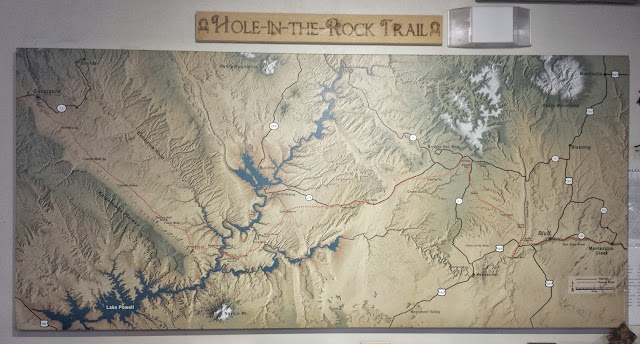 Hole in the Rock Journey
This map depicts the arduous journey (red dots, left to right) taken by about 230 Mormons of all ages, wagons and livestock from south of the Salt Lake, southeastward across incredibly rugged country, in 1880. Misinformed by earlier scouts, they came to the edge of Glen Canyon only to find a 600 foot drop and no way down. Finally, they found a narrow cleft in the rim, called Hole-in-the- Rock, through which they were able to eventually move people, wagons, and hoof-stock down a perilous incline, utilizing pick axes, pulleys, and ropes, to reach the Colorado River below. A planned 6 week walk actually required 6 months, through the winter. After crossing the Colorado River and many more miles of tough, slick rock territory, they could go no further, so founded and settled the town called Bluff, on the banks of the San Juan river. 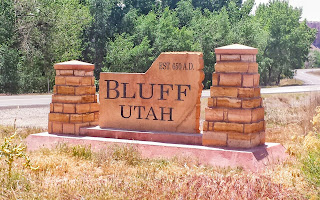 This town sign recognizes the arrival the first Native American settlers who began living in the area about 650 AD. Consequently, the area is rich in Anasazi and Pueblo history, artifacts and petroglyphs.