Family and Friends, Sorry to be so tardy, but it's time to wrap up our account of our trip to Hawaii and our last stop in Molokai. This is the last posting of the set.

As mentioned before, we wanted to see Molokai because it was so different than the other islands and because of it's history of Father Damien and the Kalaupapa Leper Colony.

It was thought that leprosy (Hansen's Disease) was originally brought to Hawaii by Chinese workers. Though most people are actually immune, Hawaiians had little resistance to outside diseases. To limit contagion, affected people were sent, by Hawaiian law, into quarantine on Molokai. The Hawaiian language called it the "Separation Disease", since families were pulled apart as infected parents and children were taken away for isolation.

Father Damien, now Saint Damien, was raised in Flemish Belgium. He became a missionary and traveled to Hawaii where he was ordained as a priest on Oahu in 1864. After several assignments in the islands, he volunteered to go to the colony on the north side of Molokai to care for the residents. Conditions were so poor, that Father Damien slept under a tree for his first nights on the peninsula. Few government resources were sent to the peninsula to assist the afflicted. Father Damien, a carpenter by trade, set about building homes, caring for patients and establishing some order and social organization.

Father Damien also went "topside" (on other parts of Molokai) to say Mass, minister and build churches for the other residents. Of the 4 churches he built topside, 2 still stand.

Father Damien served the community for 16 years, before succumbing to the disease himself. Over the first 80 years, thousands of people came to live and die there, until restrictions were lifted in the 1950s, with the advent of antibiotics and effective treatment. About 8 affected individuals still reside in Kalaupapa, having never lived anywhere else. It is now a National Historical Park, with visits only by permit and escorted tour. 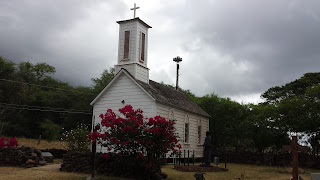 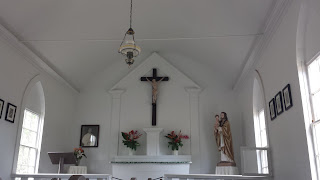 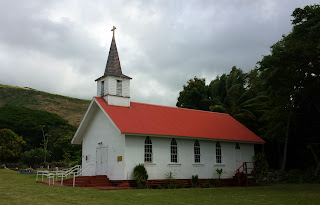 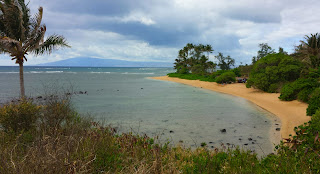 Group of watercolor artists plein air painting along the coast. Unfortunately, due to the wind, some were creating "sand" paintings. 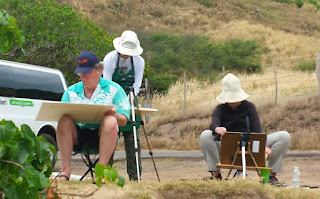 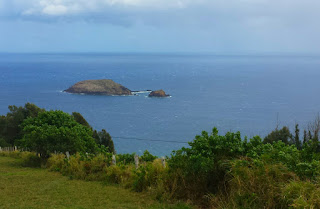 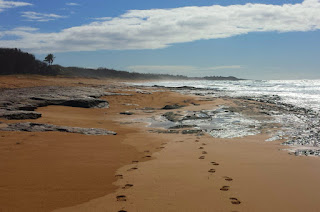 Expensive gas is one indication of the high cost of living on a remote island. 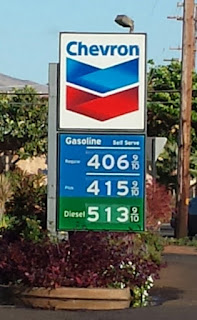 Sunset kayakers near our rented condo. 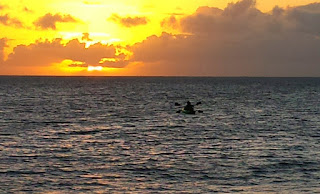 On our last day, we decided to ride the mules down the face of the cliff to the Kalaupapa peninsula to tour the historical colony. These are sturdy, sure-footed equines with stubborn temperaments, but years of experience. 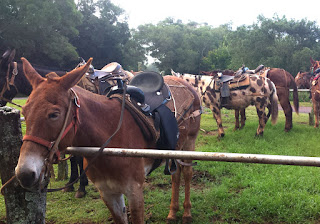 Our group of mules and riders descended 2000 feet on the muddy, potholed trail of 3.2 miles, with 26 switchbacks.

A bit of a graze before heading out on the trail. Ride 'em, Cowgirl!

My mule. "Tita" ("sister"), with ears turned back, apparently listening to my cries of "watch your step!", "be careful!" and "cliff! cliff! "CLIFF!" 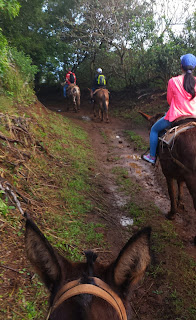 Notice the absence of guard rails or curbs.

Holding on to saddle horn and saddle back. The mules seemed to prefer the outer edge of the trail...of course!

Down to beach level with unusually large waves at low tide.

The cliff we had descended with ferocious waves crashing across the path.

To our dismay, Hawaii was experiencing unusually large swells that day, with waves up to 55 feet off Oahu's north shore. Since the waves were covering our waterside path, even at low tide, the ranger told our group that we had to skip the tour of the colony and to turn right around to leave. They expected the path to be submerged within the hour. So, aboard confused, unhappy and tired mules, we started the ascent after just a brief break. It was the first time the tour was cancelled since 1993.

View of the peninsula from the overlook later that day. Note the distant waves spraying higher than the white lighthouse.

Powerful west end waves pounding the beach that had been tranquil just the day before.

Thus ended our journey to Molokai and Hawaii; with a marvelous display of Mother Natures' power and dominance.

Thanks for coming along on our trip!
Aloha! (The End)