As a multicultural state, it's fairly easy to find evidence of the many roots of the peoples that now populate Hawaii.

Just at the north end of Lahaina, on West Maui is the Jodo Buddhist Mission. It's in a quiet location near the water's edge, with a Japanese pagoda and the largest statues of Buddha outside of Asia. The Buddha is 12 feet tall in bronze and was installed in 1968 to commemorate the 100th anniversary of the arrival of Japanese immigrants to Hawaii. 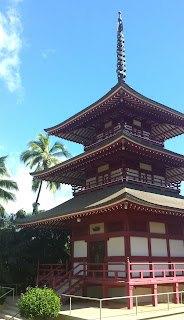 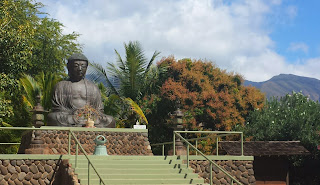 Though the core of Lahaina has succumbed to many kitchy trinket shops and expensive fashion and sunglasses stores, it still has a number of historic buildings that have endured the salt and storms of the ages. Parts of the historic jail with walls constructed from coral blocks are still standing. Sailors were jailed for failing to return to their ships by dark, carousing, drunkenness, adultery and other infractions. Since the name "Lahaina" means "cruel sun", I guess the sailors had plenty of need for "recreation". 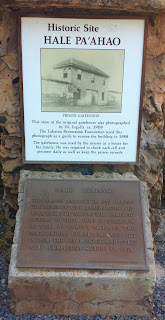 Paul and I savoring our last sunset on West Maui, Napili Point. 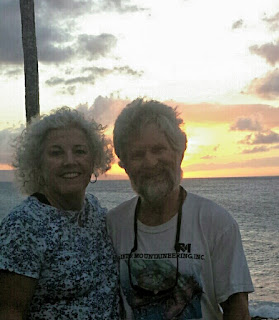 Ken and Susan Hunt, our friends and hosts also at Napili Point 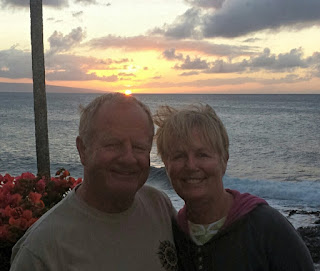 Sampling "Ululani's" Shave Ice, reportedly the best on Maui. However, after a 45 minute wait in line...it better be! Similar to a snow cone made from crushed ice, the Hawaiian treat of "shave" (not shaved) is made by shaving fine snow-like pieces of ice from a spinning block of ice in a machine. It is then drenched with flavored syrups and may sit atop ice cream or azuki bean paste. When covered with sweetened condensed milk, it is called a "snow cap". It originally also came from Japan, brought by immigrant workers, who used traditional swords to shave the ice blocks to create the dessert. 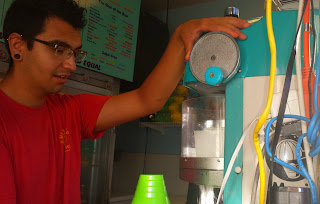 Trying to choose from among the many flavors on the menu. 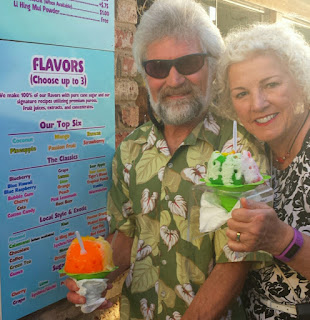 The famous, gargantuan Banyan tree in the main square, fronting the old court house in Lahaina spans nearly the entire plaza. The tree was planted by the local sheriff in 1873 on the occasion of the 50th anniversary of the first American Protestant mission in Lahaina.
A type of ficus tree, it has an enormous trunk and numerous aerial roots that extend from limbs to the ground. It provides wonderful shade all day long and is the overnight roost for flocks of myna birds. 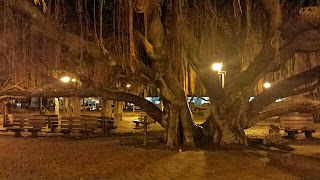 We now bid farewell to Maui and move on to the last stop on our trip, the "most Hawaiian" of the islands, Molokai. (We're actually home by now, but I haven't yet finished writing and sharing photos!)