Closing the Circle and Farewell to Iceland

Closing the Circle and Farewell to Iceland!

Thanks to everyone for following this travel blog and for your comments and questions. It's been a good way for me to track our stops and sights on this version of "The Sleep Deprivation Tour". That it has been, but well worth it for the unique experiences and people that accompanied this journey. If any of you decide to visit Iceland in the future, I'm happy to share more information. I'll also (eventually) post my "good" photos, taken with a real camera and lenses on our Apex Visual Art website and send out a note in that regard.

Leaving the small town of Seydisfjordur, we took it as a good omen that this abandoned building had a "happy" slogan on it. 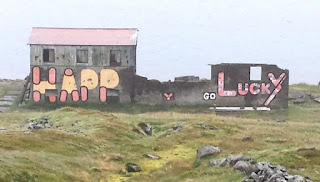 This was just a reminder that we were still in Iceland and it was still June as seen from part of the Ring Road crossing mountains in eastern Iceland. 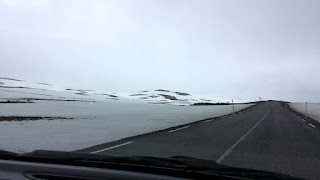 Of course, while we were "in the neighborhood", we had to stop in at the Jokulsarlon iceberg lagoon. On this visit, there were very high westerly winds, causing most of the bergs to be jammed up over on the opposite side. The tide was also coming in very fast, causing swirls, whirling water and a feeding frenzy among the terns. They didn't even have time to attack passers-by. (Kelley ;)) 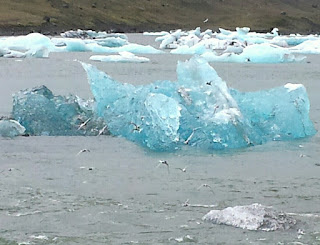 A bit further down the highway, we encountered a sizeable herd of reindeer grazing by the road. They were camera shy, but stayed within focal range, while we lunched in the car. 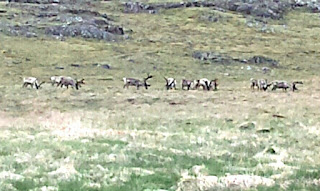 A special find was an outdoor photography exhibit in the town park at Hvolsvollur. Printed on paper (!) and suspended between trees or posts, it was a treat to see. I especially liked the one on the right of a little boy hugging a young foal. Many of the photos were of popular sights, but some were novel.

Approaching Reykjavik, we stopped in Hvergerdi to see more geothermal activity and fruit/vegetable greenhouses heated by hot water piped in from nearby steam vents and geyser beds. 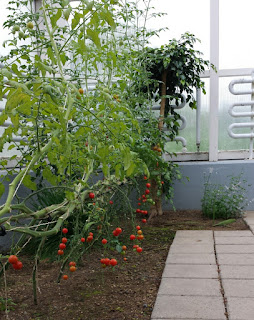 Grapes thrive in the steamy greenhouses. 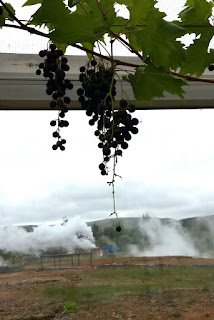 Outside Reykjavik, we smelled - then saw - this acre of hanging, gutted, drying fish, (suspended in the open air from poles) the source of a popular Icelandic snack food. I'll leave the (overwhelming) aroma to your imagination!!! 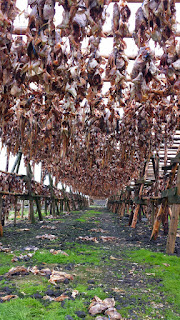 Found on the snack food aisle in every grocery store and gas station shop. 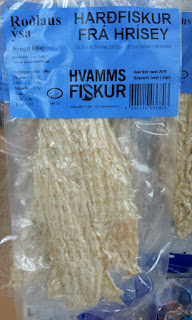 On our last full day in Iceland, in Hafnarfjordur, we hit pay dirt! the gold mine! utopia! - by discovering a town park where elves, trolls, fairies, angels, Huldufolk, mountain spirits,  lovelings, and gnomes live. They even have a special center (note elves and gnome figures in the window) for believers! 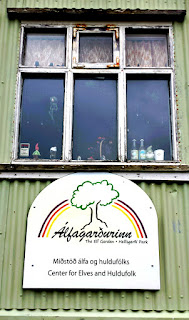 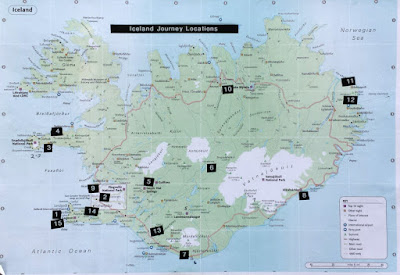 Passing over the southern part of Greenland on the way to JFK. Eager for home! 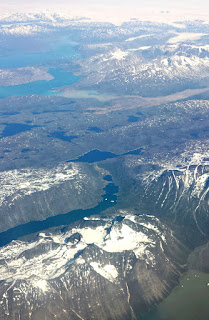 Thanks for joining us on this journey to the fascinating and exotic place called Iceland. After a short domestic trip next week, we'll be staying close to home for a while and enjoying August in Albuquerque.
Adios for now,
Barbara and Paul