End of the Trail at the Oasis of West Texas

End of the Trail at the Oasis of West Texas

On the last leg of our April journey through west and south Texas, we looped around through the Hill Country (see previous posts) to feast our eyes on the wildflowers.

The return from any trip isn't usually much fun, just a necessity. However as we turned our noses westward, we encountered the "Oasis of West Texas" and the "Pearl of the Conchos"; San Angelo, TX.

With low expectations and an "Are we there yet?" attitude, we rolled into the town with an art museum shaped like a covered wagon, an early reputation of being a "fairly lawless cow town filled with brothels, saloons and gambling houses", a "chicken farm" art center and a military fort without walls. Home to about 100,000 souls, it is situated at the confluence of the North and South Concho Rivers.

The current iteration of this small city was founded just after the Civil War ended  when the US government began to build forts in "hostile" territories. Given the lack of trees in this NE region of the Chihuahuan desert, Fort Concho was constructed of limestone without walled defenses. The fort housed and trained 9th & 10th Cavalry, 24th & 25th Infantry, and the famous Black Cavalry, otherwise known as "Buffalo" Soldiers by Native Americans. Little did I know that the last known Buffalo Soldier, Mark Matthews, died at the age of 111 in 2005!!

Fort Concho, built of limestone, has been restored and is open to visitors. 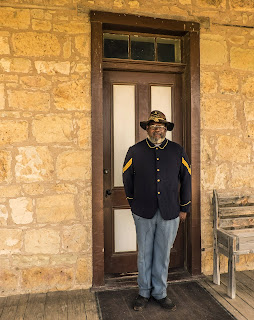 In the 1970's, an enterprising potter in San Angelo purchased property which had been an old chicken farm. Over the years he converted it into studio and retail space for 15 artists, with an adjoining cafe and B&B. Who could pass that up?? Though the center is closed on Sundays, we were invited in ... to spend some money!

The last little unexpected gem we had time to discover was that San Angelo is also the home of the International Water Lily Collection. One of the local residents has made it his life's work to travel the world in search of rare and unusual species to add to the ponds. The collection now boasts over 300 varieties of water lilies - in the desert of West Texas!

Then it was really time to head home, via the plains (read: flat land with nowhere for water to run off) of West Texas. When the skies open up out there, watch out and get ready to paddle!

One more stop in the mountains around Ruidoso, NM, AKA hangout of Billy, the Kid and wealthy folks escaping the summer heat of Texas and parts south. Then back to Albuquerque, home, family and local friends. Thanks for coming along on this journey.

Regards,
Barbara and Paul
Posted by P*A*T (Photography*Art*Travel) at 10:51 PM